A canopy of trees? That’s a lot of trees! So you may ask yourself, where are we going to get that many trees? Ken received a $15,000 grant from Manitoba Hydro through their Forest Enhancement Program to buy trees that will be planted along the trail. The grant allowed for 50 trees to be purchased from T & T Seeds in Headingley, MB. This summer T & T Seeds assisted with the tree planting and also provided a very generous donation of Saskatoon bushes to plant along the trail.

Ken also reached out to the Manitoba Forestry Association and acquired 100 saplings that will be planted in pots and nurtured by volunteers over the next two years until they are strong enough to be planted along the trail.

A big thanks and shout out to Ken! Great job!

The trees were planted West of the Wescana St. trail head this past summer. Below are some pictures of the big day! 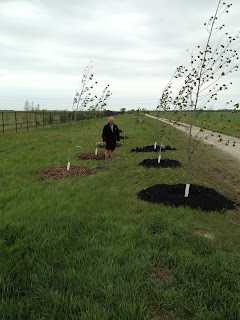 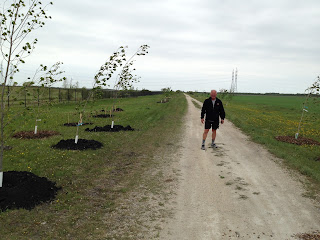 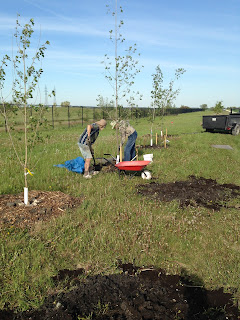 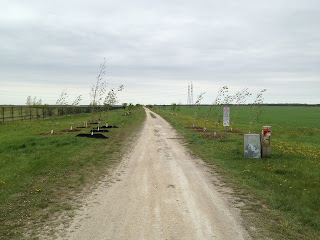 A little update on the bridge – over the last few weekends great effort has been made by the Headingley Grand Trunk Trail Association board members by clearing and preparing the bridge site. Trees have been removed, grass cut and brush cleared from the East and West banks of the creek. Preparing the foundation of the bridge is well under way and we’ll continue progress in early spring of 2016. The bridge will extend our beautiful trail westward into Beaudry Park.

Throughout the winter and early spring we will continue with our fundraising efforts. We are so excited to get going on this project. Thank you to everyone who has helped out with this project so far!
Posted by Unknown at 20:28 No comments:

Ray Hutton gave a quick review of HGTT's current financial standing and some upcoming plans for investment in the trail.

Susanne Moore led us in the official election of officers for the new year.

Ken Sommerfield has big plans for planting trees all along the trail, focusing first on the section West of Wescana Street. His dream is to create a canopy of trees the full length of the trail, which will provide shelter and shade. We'll be posting a full detailed blog on the project later in the year. Ken even brought seedlings to the meeting for attendees to take home.

Last year Lois Maclennan took on the task of reviving the Barton Garden, located between Alboro and Rodney Street, and is happily taking on the task again this year. She has big plans for the garden, focusing on planting native flowers and grasses to the area. Next time you pass by the garden, take a moment to sit and enjoy the flowers.

Dr. Diana Bizecki Robson is a Botanist at the Manitoba Museum who gave an excellent presentation on prairie pollinators and her field work researching the relationship between plants and insects. After her presentation the room was a"BUZZ" with the truly fascinating information we had just learned. A big thank you to Dr. Bizecki Robson for opening our eyes to the huge impact those little bugs can have on our environment.

Thank you to all of our AGM attendees, Lois Maclennan, Dr. Diana Bizecki Robson, the RM of Headingley, HGTTA Board Members, and Tim Hortons.

We'd also like to thank Ray Hutton, who has stepped down as Treasurer, for his many years on the board. Ray, you will be greatly missed!
Posted by Unknown at 18:51 No comments:

The HGTTA met with Manitoba Conversation on February 12, 2015 to discuss the bridge concept and our approach. We received strong indications of support and some very good suggestions for design of the bridge based on their experience. They also provided some suggestions of funding support.
Manitoba Conservation is moving ahead with an application to the Department of Fisheries and Ocean on our behalf for the bridge. The approval is required for any work that might affect a stream, creek or river to protect the habitat and wildlife. Our proposed bridge will not impact the creek in any way.
As part of our discussions, we are going to look at switching from timber to a steel bridge to save money and provide for a longer lasting structure. The plan is to develop a concept in the coming month or two, and compare the costs.
Posted by Unknown at 20:05 No comments:

The HGTTA contacted the RM of Cartier with our Bridge proposal, which is in the RM’s jurisdiction. The RM’s Counsel provided a letter of support for the Beaudry Bridge as an important addition to an active transportation corridor which could be developed in Cartier as an extension to the HGTT.
For early 2015, we hope to secure support from Manitoba Conservation, and have a budget and preliminary design in place to allow the HGTTA to pursue funding support from various sponsors and funding agencies.
For summer 2015, we hope to undertake some repairs to the existing bridge abutments, and clear some brush and tree limbs that have grown in the way. This will allow an accurate measurement of the bridge’s span, and allow preparations for eventual bridge construction and installation!
Posted by Unknown at 20:02 No comments:

An Ode to the Grand Trunk Trail

There is much to see, if you care to be, on the Headingley Grand Trunk Trail,
In seasons all, including fall, along the path you’ll sail.
You’ll see the trees, and bumblebees, the birds, and often deer,
Just look around, with ear to the ground, and such sounds you will surely hear.

The sound of a train, no need to strain, to the south there will be a blast,
Just close your eyes, to your surprise, there’ll be whistles from the distant past.
In the early spring, it’s quite a thing, to hike to Beaudry Park,
The birds are back, some joyfully quack, and we hear the meadowlark.

Now back to the sights, in the glimmering lights, what else is on the trail?
There’s fox about, and the odd coyote, and we’ve even seen a quail.
The frogs are in love with the trail above, of spring they are such a sign,
But caution make, if the hike you take, is close to our porcupine.

The legends abound, if you scout around, on the good ol’ Grand Trunk Trail,
And they’re all quite true, so we know that you, will learn them without fail.
A wizard lives, and his wisdom gives, on the trail to passersby,
He’s always there, approach with care, note the twinkle in his eye.

It’s cold these days, but the sun’s warm rays, keep us cheerful as we hike,
Get out on the trail, you’ll not be pale, the beauty out there you’ll like.
It’s great to go, across the snow, with a smiling, happy dog,
Who loves the trail, and wags his tail, and sends this to Marley’s blog.

Composed on a cold January day in Headingley-–with apologies to Robert W. Service, author of ‘The Cremation of Sam McGee’. 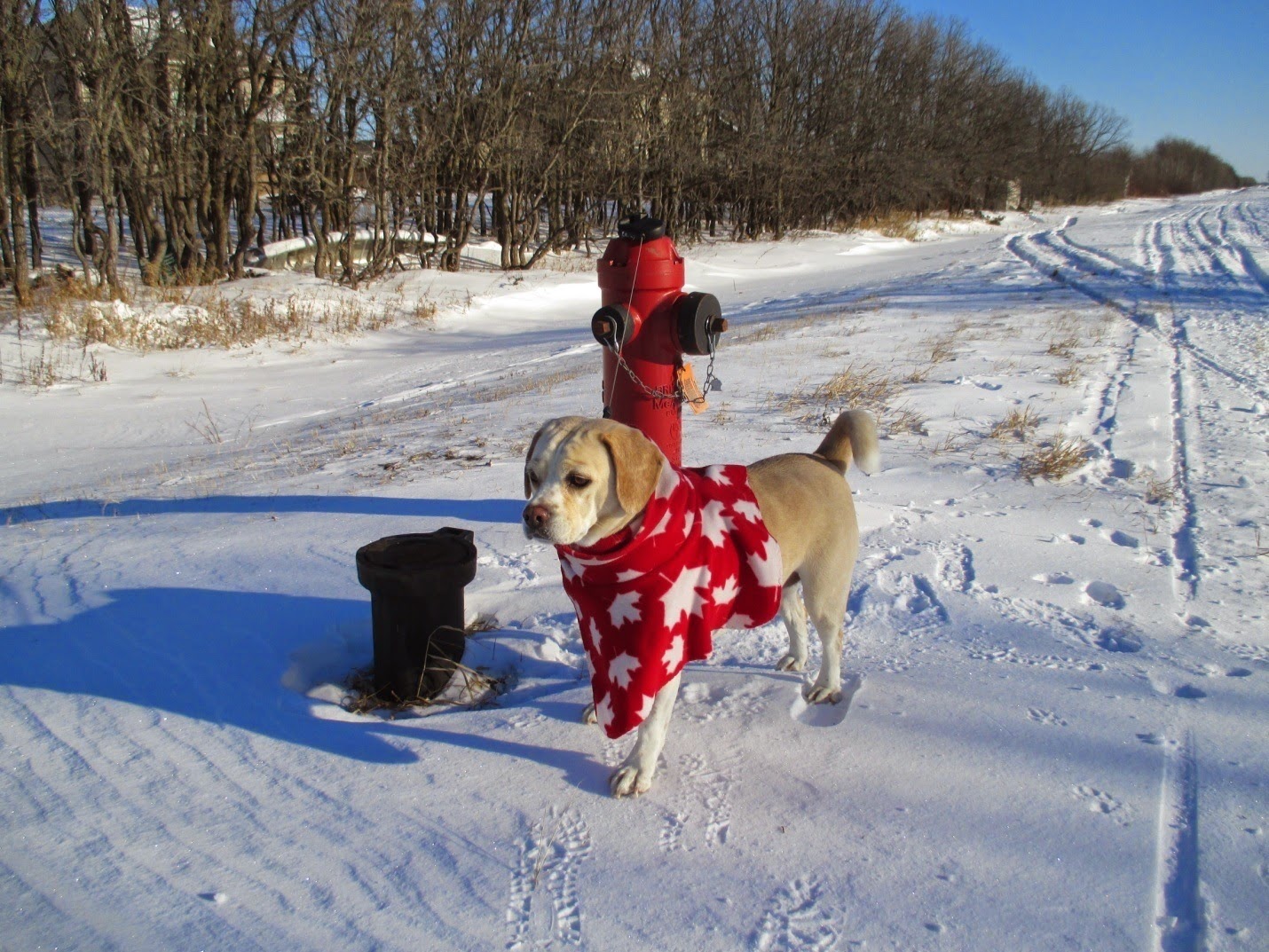 January  11, 2015.  Diggy enjoying the HGTT hydrant at Breezy Bend, only minus 25 C.
Note what a difference a year makes.  Last winter the hydrant was almost covered with snow. 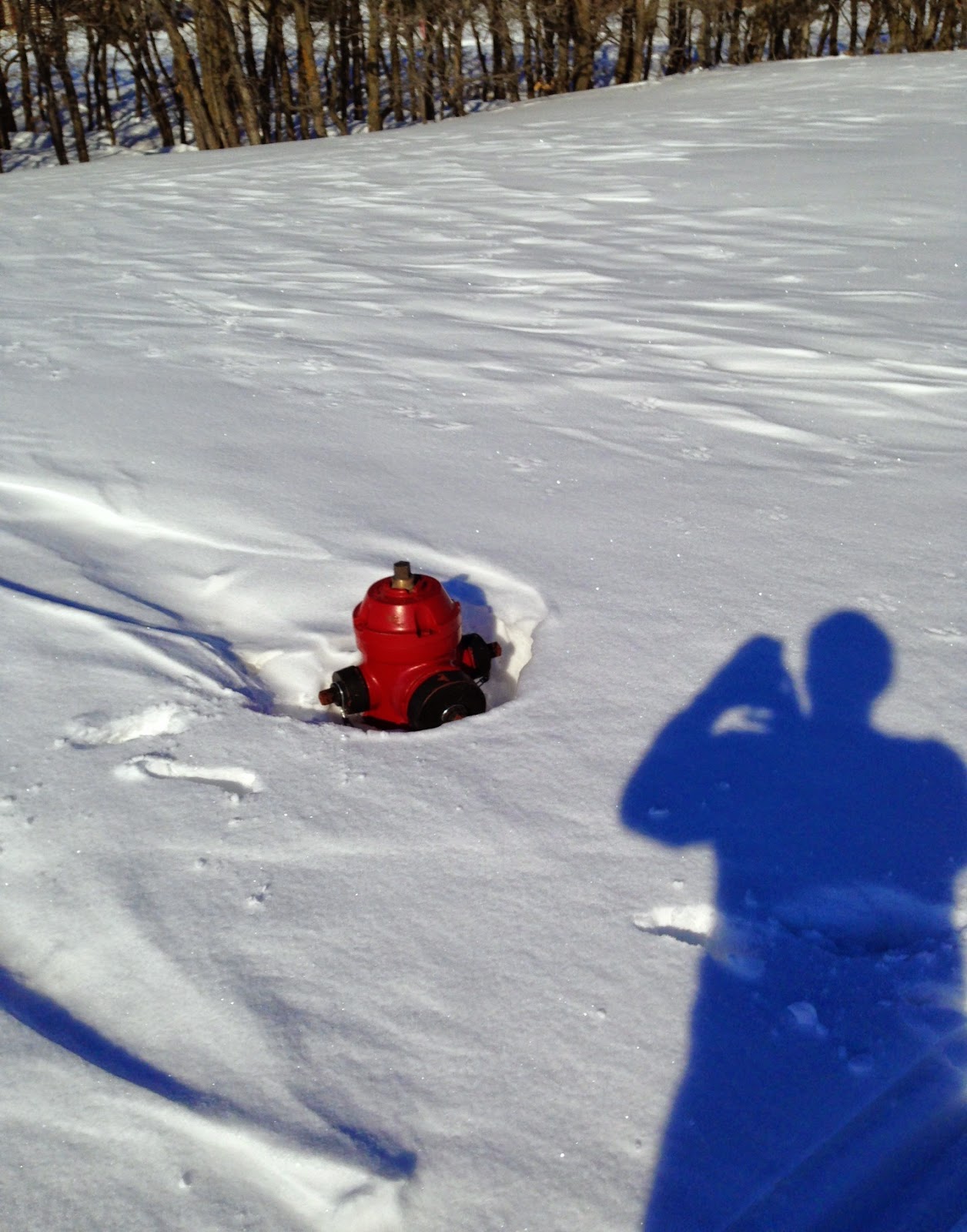 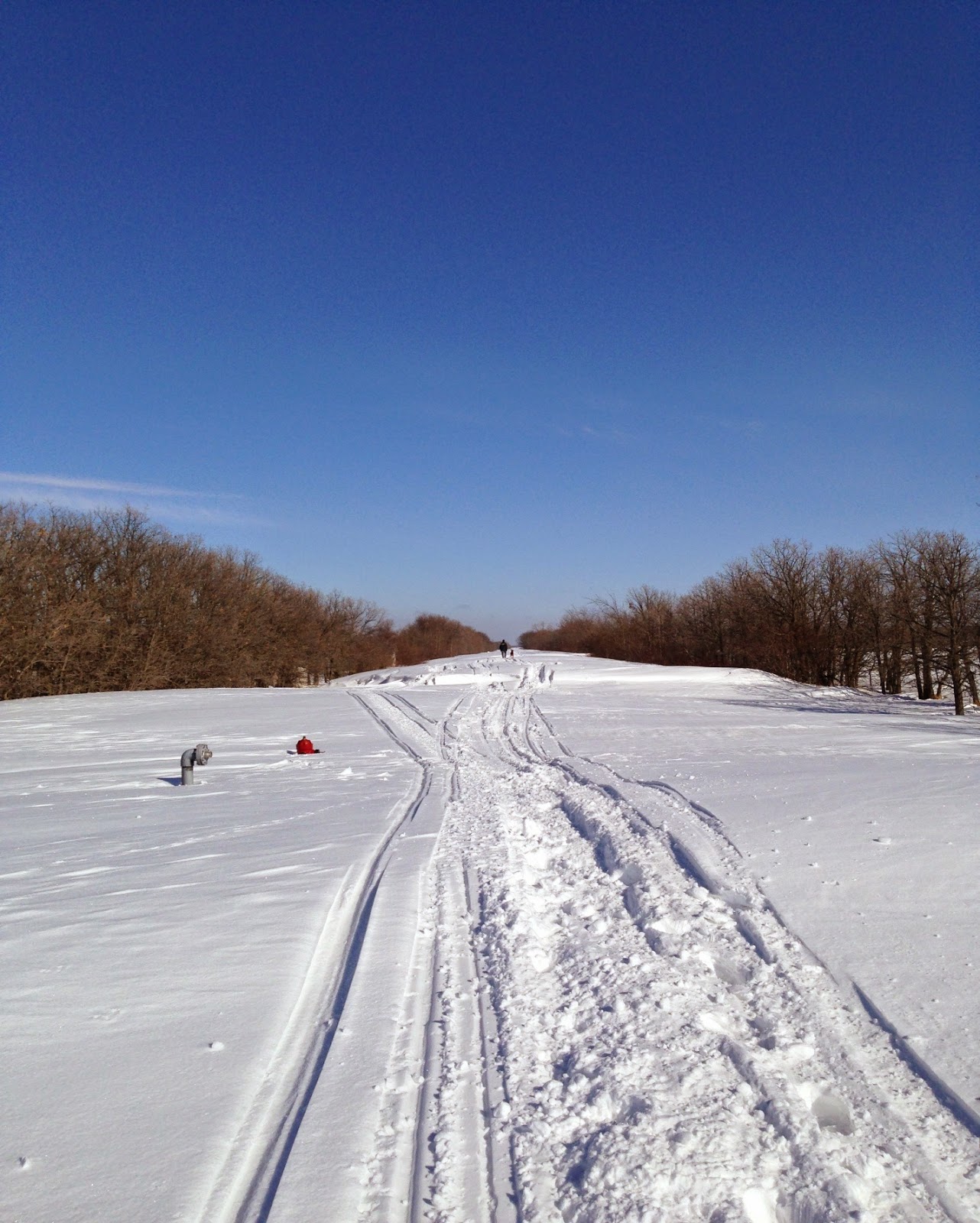 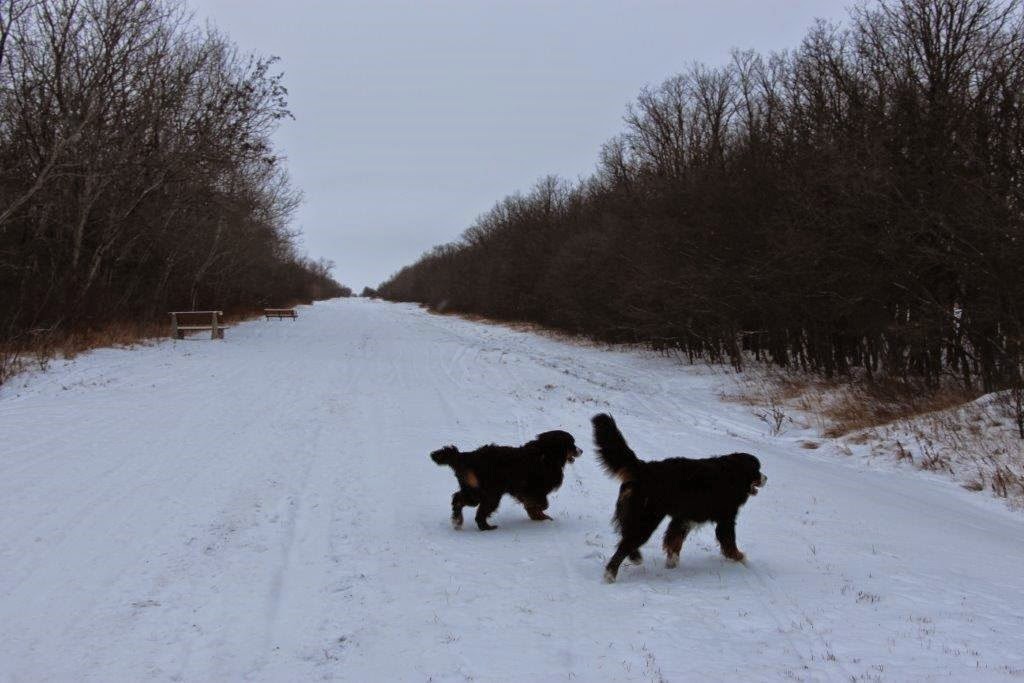 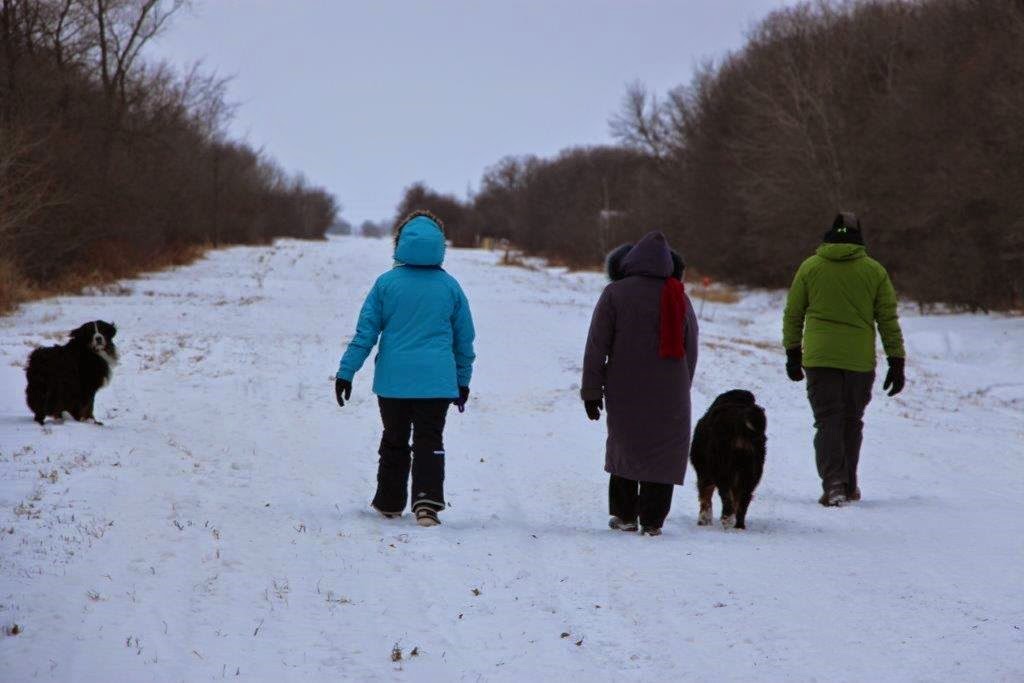 To expand the HGTT westward in keeping with the original Grand Trunk Pacific Railway’s objectives, the HGTTA met with Manitoba Conversation to discuss the construction of a footbridge in Beaudry Park to allow the trail to extend into the Park. The idea was a small bridge, or crossing to allow access from the trail and the eastern Park trails, to the main trail network within the Park.
Unfortunately, due to concerns with floodwater levels, impact on the stream, and other licensing concerns, this idea did not move ahead until recently…
A new idea has been put forward to construct a foot bridge over the Beaudry Creek at the original timber railway bridge crossing. Most of the original timber pilings remain in place, and a new bridge would be well above flood waters all year.

This idea was again presented to Manitoba Conversation, who is going to revisit impact on the stream, and other licensing issues. In the meantime, we are working on developing a cost estimate for the bridge, a preliminary design, and a schedule.
Posted by Unknown at 15:34 No comments: